Here at Phones Review we enjoy bringing you news about the Google Doodles that appear from time to time, often to mark an occasion or paying tribute to someone’s life. Today it’s the turn of computer pioneer, mathematician and artificial intelligence expert Alan Turing and as Google is honoring what would have been his 100th birthday we thought it would be good to round up some iOS apps regarding Turing’s work.

The Google Doodle that appears today is based on the Turing Machine that many of you will have heard, the aim of which is to analyze whether mathematical problems and algorithms are computable. Google’s version involves a program to match binary numbers with correct answers making the Google logo letters light up. Turing was born on June 23, 1912 and sadly died at the young age of 41 on June 7, 1954 from cyanide poisoning. His work and the importance of it lives on though so as our way of paying tribute to him take a look at some of the apps we’ve rounded up for you. Simply click on the app titles to be taken straight to the App Store for more details or to download the apps.

Firstly we have Turing Machine Simulator and this is app is priced at $1.99 and suitable for iPhone, iPod touch and iPad running iOS 2.2.1 or later. This app avoids the need for pen and paper to simulate the program execution and offers an easy way to execute Turing programs and analyze. New programs can be written, executed and analyzed by the user and email can also be used to import and export Turing programs. Some example Turing programs are included on the app to try out.

Next we have the Turing SImulator, which is for iPad only running iOS 4.2 or later and priced at $7.99. This is a great educational tool with an excellent user interface and cleverly uses intuitive state diagrams, which are resizable and can be moved with a finger tap. This is an especially good tool for laboratory exercises or front-teaching and there’s also a Turing Simulator PRO app, suitable for iPads running iOS 4.2 or later and priced at a fairly hefty $37.99. The PRO version of the app supports VGA output.

Another app, again for iPad only, is Turing the Universe. This is a free app for iPads running iOS 5.0 or later. Developed by the School of Informatics and Scientists at Nagoya University it’s a graphical simulator of Turing machines. The touch interface can be used for drawing programs and the software keyboard can be used to add comments to nodes, arcs and canvases. Your machine can also be re-used as a sub-machine and you can copy and paste sub-machines between canvases. That concludes our look at iOS apps involving the work of Alan Turing, whose life and works is marked today with a Google Doodle tribute. Have you already used any of these apps and could recommend them (or not)? What do you think of Google’s way of honoring Alan Turing? Send your comments to let us know. 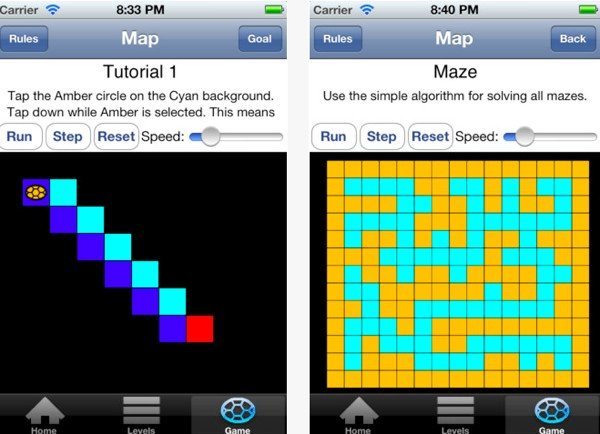