There are so many gadgets not only for your mobile phone but also your house phone as well, but what if you could find an accessory that would bring the two together? Thankfully this is something that we no longer have to think about because Konector were kind enough to send us over the LiGo Bluewave Link to Mobile Hub, which basically allows you to make and receive mobile phone calls on your home phone.

When we first thought about it we could not see a reason why we would need such a gadget, but after spending some time with it we could see why there would be a need after all — but one has to wonder how popular such a gadget would be?

This is a Bluetooth device so will only work with mobile phones that support this feature — which will be most modern ones. We were a little apprehensive at first because it’s hard to imagine how such a device would work, but we’re pleased that we were sent the LiGo Bluewave Link to Mobile Hub because there’s nothing better than seeing a new accessory doing well. First Impressions
Looking at the box it looks like a very simply device to set up, but we were a little worried at how cheap the device looked on the box. Upon unpacking we found that the hub was made from plastic and did not have a quality feel to it, but then again this matches most home phones these days. 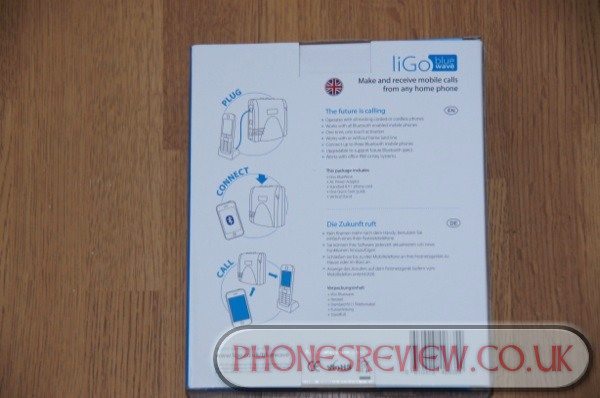 The Design
Okay, so we’re not a fan of the cheap plastic finish, but it doesn’t matter because it will just be placed in the corner and left to do its own thing. We have noticed how similar this gadget is to a number of broadband hubs on the market, so would look pretty cool when placed next to them. However, we would like to inform you that it’s not as large as it looks in many of the images you see on the Internet, so will not look overpowering in your home. The Key Features
There are so many key features for this device, but we’ll point out some of the more important ones. Firstly it’s Bluetooth and will support up to three mobile phones at once, and so that you do not get confused you can customize your ringtones so you can tell if it’s a mobile or house phone call coming through. There’s also call waiting for each mobile phone and you can even use this if you do not have a landline. This is ideal if you cannot get a landline where you live, but still struggle to get used to a mobile phone, so you could still use a simple home phone, but instead you will just be receiving calls from your mobile instead — this is an ideal feature for the elderly. The size for the LiGo Bluewave Link to Mobile Hub is 120h x 120w x 45d. The Positives
Having spent time with the gadget it’s clear to see the benefits, such as if you are elderly (as mentioned above) and if you have left your mobile phone downstairs and need to get to the phone quick. It’s also very quick and easy to set up (which we did with an iPhone 5) and because it’s small, it’s not too imposing wherever you place it in your home. The Negatives
You may have guessed that we are not fans of the cheap finish, and because of this one would presume that the device would be cheaper than what it is (we’ll get to the price soon), but then again because it’s new it could come down at a later date. We were also unimpressed with the quality of the call when testing it out, as it did not have much depth to it. Now one would presume that this could be down to the home phone (which it is not) or the network (O2) could have been having an issue (which could have been a possibility). We did try making and receiving calls several times and the results were always the same, it was more like a call you would get from a cheap Bluetooth headset. Phones Review Overall Summary
Okay so it’s clear to see that the LiGo Bluewave Link to Mobile Hub is not perfect and the fact that we pointed out a number of issues that we had with the device. Having said that, we would still recommend this because the issue with the call quality could have been down to other factors, we say this because overall the response from those who have already purchased the device have been pretty positive. We also love the idea if you live in a large house and you are charging your mobile phone in a dock in one room, but are able to take an important call while in another, say at the top of the house. We were clear that we were not convinced that such a device would be needed, but after spending some time with it — well we’d say you’d wonder how you did without it for so long. Where to Buy and Price
There are a number of online retailers selling the LiGo Bluewave Link to Mobile Hub, but we would suggest going direct to LiGo and use their online store. They are currently selling their latest gadget for Â£99.99, which is the same price as Amazon UK.

Other photos and a video