Nokia put out a press release about how they want to take over Trolltech and strengthen S40 and S60, but this has been heard before. Where? Well during Nokia World they had an event called “Capital Market Days” and a recorded webcast was made of Niklas Savander, the head of Nokia’s new Services and Software unit had to say. 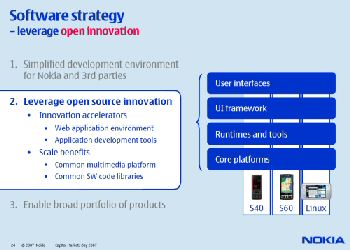 His talk was on why Nokia didn’t have a thin product, but a platform of thin products, and how Nokia plans to go even thinner. He goes on about Nokia’s strategy in some length, like how Nokia is trying to make mobile space the same as PC space so you can simply slap on an OS on any given hardware.

The purchase of Trolltech makes Savander’s talk more digestible as once listening to the webcast you will know a tad more about Nokia’s strategy, via the link below.