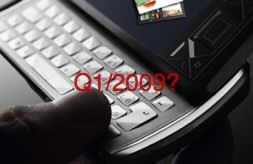 Having said that, it isn’t official as Sony Ericsson hasn’t made any official statement as yet and Sony Ericsson does have a bit of history with late release dates such as with the P990i, and as long as Sony Ericsson take the extra time to make sure the XPERIA X1 runs properly then the wait should be worth it.

One thought on “Delayed till Q1 09 Sony Ericsson XPERIA X1”