Ok, I reported the other day that there were a few minor changes happening to Apple’s iPhone (See Here) which may or may not happen mainly to do with the buttons on the interface.

Well now apparently there are some major changes coming for the iPhone v2.0.

An invaluable source of upcoming iPhone features is freely downloadable for the iPhone SDK from Apple; bear in mind the iPhone is revolutionary in how the OS can update and features added with firmware update through iTunes.

OK so what are these major changes all about?

Firstly, Apple will now allow mass email deletion with its iPhone v2.0; who doesn’t want to be able to quickly delete all those unwanted spam emails that keep littering your inbox? A good move, and one that should be available in a matter of months. So discarding all the crap spam will be as easy as tapping the delete button. 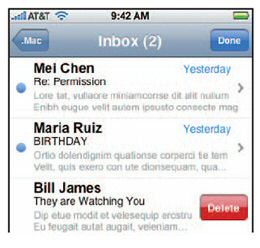 Next up is Bonjour; Mac users already know the greatness that is Bonjour and just what it will mean to the iPhone. Bonjour enables easy connection to network devices; it’s as easy as viewing a connection device and then connecting to it. Bonjour has been a sleeper on previous iPhone firmware’s, but now it seem Bonjour will be becoming active round about June. The iPhone SDK includes Bonjour in the base system, core foundation and foundation.

Safari: Full screen mode on Safari, with the new iPhone SDK developers will be able to use a full screen mode that displays web-apps and web pages without the Safari address bar or navigation bookmark. Apparently all is needed is the addition of a Meta tag in the web-app/web page code, and web-apps with Meta tags launch straight from full screen mode.

SVG support: with SVG images can be highly compressed to shrink the file size. The SVG image format compresses into tiny proportions yet still maintain the files resolution, which means speedier downloading of SVG images on the iPhone. iPhone v2.0 also supports new CSS effects which helps take the sting out of the absence of Flash, and some CSS effect will also be hardware accelerated.

PowerPoint: PowerPoint will now be viewable through the iPhone’s mail client. Microsoft Excel and Word are already viewable and the addition of PowerPoint rounds it off nicely.

Locally stored web-apps: with this any web developer will be able to code web application for the iPhone. If you don’t have a web connection, just store the web-apps locally and they are then as good as native apps but slightly limited due to AJAX, HTML, and CSS. Apple says the iPhone v2.0 will support client-side database API which will allow total functionality even with a network disconnected.

Lastly, Search: apparently the iPhone may be gaining a search feature. If you “Search on iPhone” you just may come up empty handed. With auto completion you can begin typing a contact and up pops matching numbers and email addresses. However a true search feature is needed on the iPhone as sometimes one tends to forget contact names. So yes you’ve guessed it, it seems the iPhone v2.0 may include a search function.