UPDATE: The sequel to SWAT Force, SWAT Elite Troops has been released by Vivendi Games Mobile. This new mobile game apparently features an Instant Tactical Decision system which supposedly allows the gamer to make snap decisions instantly within the game…our previous report can be found here

It appears the developers have optimised SWAT Elite Troops’s game for mobile control, which is usually either forgotten about or done poorly as a mobile handset isn’t a console gamepad. Anyway in SWAT Elite Troops you take command of an elite team and go about killing off bad guys, taking hostages, and defusing bombs, you know, the usual stuff in these military/law enforcer games. The gamer will also have access to an abundance of killing weapons such as stub-guns, flash guns, guns, and guns, and guns, ect, I’m sure you get the general ideal. 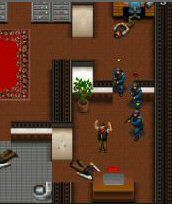