Well we say handset, but probably mean truckset as you would need a truck for the mobile handset. This particular guy took it upon himself to set about constructing a fully functional mobile handset that would be 620 times larger than the model he used to get the correct perspective.

Mr Tan of Songyuan city states that this huge phone is an exact copy of the much smaller version he uses. The large mobile came out a staggering 3 feet tall and weighs in at 48 pounds. Apparently this mega-phone has no trouble sending and receiving calls and text messages, and is probably great for surfing the net with such a large display. 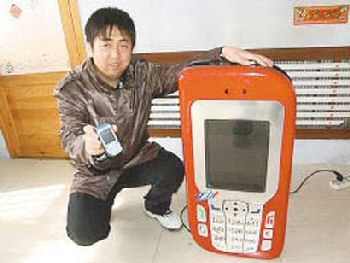 It needs an AC outlet to operate so it’s not really that mobile, and lacks vibration, which is just as well because it would probably feel like an earthquake! Bet the sound is awesome though!