It was inevitable that the Apple iPhone would be eventually used as a gaming platform, and well with the AppStore launching within a couple of months the overall success of mobile gaming on the Apple iPhone will be largely left to just how much game development becomes available for use on the iPhone handset.

Spore was one such game demonstrated during the Apple iPhone SDK launch, however, mobile games such as Spore are not designed for a casual gaming experience. Gameplay evolves and builds on previous sessions. But with Sega’s Super Monkey Ball, which was also demonstrated at the iPhone SDK launch, just happens to be the embodiment of casual gaming. Which means, pick up your Apple iPhone handset, begin gaming with Super Monkey Ball and then quit when you tire of it. 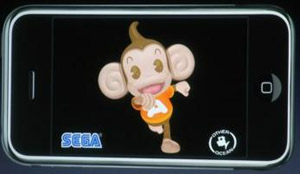 Ethan Einhorn of Sega sat down with GameCyte and spoke about the development of Sega’s Super Monkey Ball for the Apple iPhone, and Einhorn states that the casual gaming experience on the Apple iPhone will be much like that on the Wii, and gaming performance that’s on par with other handheld gaming devices. Apple and Sega presumably have a strong working relationship so expect many more mobile games for the Apple iPhone from Sega.

Video with Ethan Einhorn of Sega below, check it out