You may agree there are a few features missing from the first-gen Apple iPhone handset; however, even though the iPhone lacks features such as video recording, and MMS, the Apple iPhone still vastly appeals. This lack of features doesn’t mean that iPhone users will always be without them though. 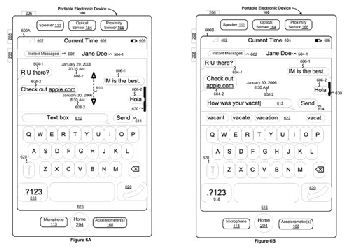 .The name of the game here is bubble-style chat; one view the IM app work just like a current SMS app, while another view replaces the text input box with word suggestions, and placing text with a bubble next to the conversation bubbles. A feature that offers suggestions for the word which is being typed appears just above the keyboard, which offers more flexibility that present predictive text. 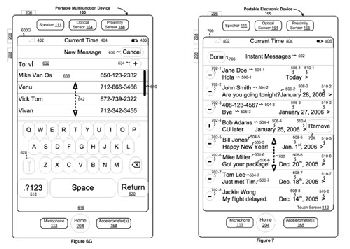 Also as this comes from Apple we can expect the planned Im feature will probably run in the background. As we all know, Apple iPhone SDK limitations halt 3rd — party apps when the iPhone handset is turned on/off, but it looks as if this particular patent application at least hints t a new IM client which allows the user to receive IM’s even while the iphone handset is switched off.

Finally there is also a whisper that there may well be a MMS and video patent app coming out of Apple.