The Apple iPhone is only available in a few countries at present; however that hasn’t stopped Google offering iPhone optimised versions of its services to 33 new markets. Maybe Google know something we don’t perhaps?

Maybe Google are privy to which future markets the Apple iPhone is going to hit in the future, or could it be that Google are just providing iPhone users who travel the globe with “Google local experience” no matter where in the world they be. 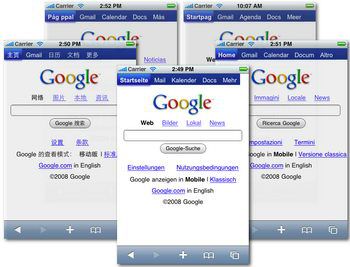 What’s more is that Google obviously realise there are a great deal of unlocked iPhone handsets out there, and wish to serve those potential customers as well, and of course the Apple iPod Touch users. The new “integrated Google experience for the iPhone and iPod Touch” has now expanded to encompass 33 new markets and with 16 additional languages ranging from Swedish to Chinese, and from Argentina to New Zealand.

Have an Apple iPhone or Apple iPod Touch and want to try out the new Google interface? If so just point your iPod Touch or iPhone browser at www.google.com and you’ll soon be ready to roll.