So let’s take a look at the Nokia 1650 mobile phone, priced at Â£44.00 it is in competition with the likes of the Fly SLT100, available from Virgin Mobile PAYG. One of the great advantages the Nokia 1650 has is that it is a SIM free mobile phone so the user can shop around for a good cheap SIM only tariff that really suits their own personal needs.

The Nokia 1650 does have a slight plasticky feel to it but still looks kind of cool in the silver, black and cream livery, and Nokia Online store also has the Nokia 1650 available in red and silver option if you want your handset to stand out a little. 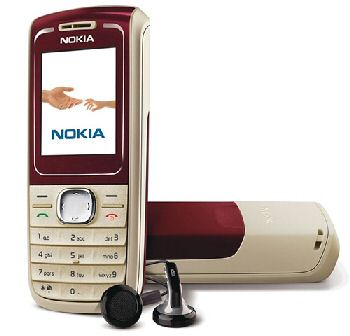 The build of the Nokia 1650 is of better quality, and its rubber moulding around the number keys has a raised lower edge so fining them and hitting the correct button is somewhat easier. The same can be said of the call and end buttons, and only the two soft menu keys are actually completely flat. If these is to be one gripe about the Nokia 1650 is has to be the lack of a press-to-select feature on its navigation pad, which means unfortunately the user has to use a soft key to choose and select an item.

The Nokia 1650’s screen measures 35 x 28mm with 128 x 160 pixels, which isn’t cutting edge but an improvement on the mono screen Nokia 1200 and well is fine for the basics. And with the lack of a web browser the user shouldn’t be tempted to over stretch the screens capabilities, so may be useful for the older users amongst us. One snag is for SMS you have to scroll if the message is longer than 20 words. 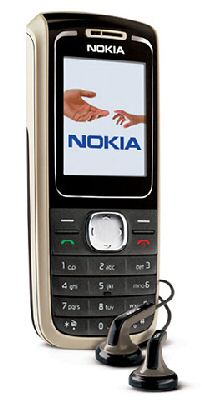 The Nokia 1650 interface is Series 30 operating system, a long way behind the curve in capabilities but options in a vertical scrolling menu can show you 3 choices simultaneously, while the right soft key can be configured to a range of menu choices that the user uses most often.

The Nokia 1650 can be used for hands-free calling but unfortunately not for listening to your own music as it lacks a music player, but there is an FM radio while Nokia suggest the battery is good for 8 hours of talk-time and420 hours of standby time, depending on how long you use that radio for that is. So the Nokia could be one of those mobile phones that don’t need charging every day, although the tendency with long battery life is to forget to charge it at all.

It probably won’t come as a surprise that the Nokia 1650 lacks an expansion slot, and the internal 8MB memory is all you get, and well to be honest for a mobile phone that has no camera or media player 8MB should be ample. Bluetooth is another thing that is missing, along with no real calendar, but there is a reminders application which allows the user to record stuff they need reminding of and attach them to a date and time.

Another lack here is PC sync which is somewhat understandable considering the Nokia 1650’s limited functionality. What you do get is a speaking clock in which a human voice announces the time until you turn it off which is good for an alarm, and the FM radio can also be used in the alarm function. Well that’s about it for the Nokia 1650, plenty of lacking features, but is by the way dual-band. Finally the Nokia 1650 is your basic handset with minimal extras and a SIM free option that makes is a viable alternative handset.