Apple only have the 3G iPhone coming soon which is nothing compared to the likes of NTT DoCoMo because they are launching a staggering 19 mobile phones this year in the 906i and 706i Series.

Below you will see the official press release but let me summarize it for you, the Japanese are true marvels and it proves what they are capable of, and to me this is basically telling all you waiting for the Apple 3G iPhone forget about your fantasies. Come on 19 new handsets unveiled, eight of the 906i series will boast 3G/GSM international roaming, HSDPA, 1-seg mobile TV, GPS, DCMX mobile credit card and iD mobile credit payment technology and full browser with Flash 8 support plus VGA LCD screens, text translation of Chinese, English and Japanese and will even support direct transfer of Blu-ray video. 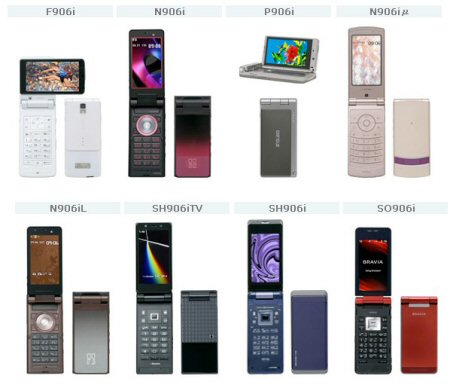 The Official Press Release:
TOKYO, JAPAN, May 27, 2008 — NTT DOCOMO, INC. and its eight regional subsidiaries announced today the new 906i and 706i series comprising 19 handsets and 64 body colors, which will be launched on or after June 1 (see charts below).

The 906i series enables full-spec enjoyment of diverse video content and services, including DOCOMO’s Music & Video Channel, which provides more than 100 channels of downloadable broadcasts spanning 14 genres, and the new video portal on the i-modeâ„¢ top screen, which offers a wide array of free, searchable videos and clips. The handsets come with upgraded full browsers to play Windows MediaÂ® Video (all models except F906i) and FlashÂ® 8 (all models except P906i) content commonly available on PC websites, and can upload movies and images of up to 2MB.

The new 706i series, 11 handsets in all, boasts slim, sophisticated designs and compatibility with “One-Segment” mobile TV. The 706i meets diverse needs with a wide-ranging lineup, including the Extra-Slim One-Seg Phone (slimmest One-Seg phone available), the Waterproof One-Seg Phone, the Wellness phone that monitors diet and health, and the enhanced Easy-to-Use phone with improved user interface. Some models are also compatible with advanced services such as HSDPA and 3G/GSM international roaming.

Main Specifications of FOMA 906i Series

Selected Services and Features Available with 906i Series

Main Specifications of FOMA 706i Series

Selected Services and Features Available with 706i Series