Yet another supposed real Apple 3G iPhone photo what you think?

Look on the internet and you will find virtually load of images depicting the forthcoming Apple 3G iPhone, numerous site have posed what are purportedly the real deal images of the 3G iPhone, renderings, mock-ups, some looking ridiculous while others quite passable and possible.

So here’s a word to the wise, apparently even prominent case manufacturers in general do not receive advance prototypes of any future release of Apple’s iPhone of iPod models. For the most part, manufacturers actually read all the hype and rumours floating about the net waves, they then analyse possibilities and then draft mock-ups or sample products based on potential outcomes.

More so, some manufacturers even run production with East Asian manufacturers based on project designs, and therefore any image of an Apple 3G iPhone appearing that is based solely on case manufacturer’s designs should be taken with a grain of suspicion.

Why tell you all this? Yep you guessed it yet another Apple 3G iPhone photo has hit the net waves. This new image comes via “JSN1”a respected member of the “Hackintosh” forums, who previously developed a method allowing the use of iPhone’s with Mac OS X 10.4.9 and previous. 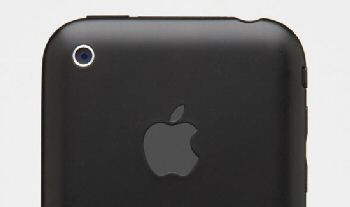 This new JSN1 image depicts the Apple 3G iPhone as off-black and very similar to that of the present iPhone. According to JSN1 the image was taken at the Apple Store on 5th Avenue in Manhattan, this is where it is rumoured that Apple was to be shooting a commercial for the soon to be released Apple 3G iPhone.

One thought on “Yet another supposed real Apple 3G iPhone photo what you think?”