TeliaSonera throw out bid of $42 billion by France Telecom

The Swedish government is TeliaSonera’s largest shareholder and they have turned down France Telecom’s bid for the mobile operator of 252.5 billion SKR, which is about $42 billion cash and share option which currently sits at 26% higher than a valuation in mid-April.

Apparently TeliaSonera rejected the offer immediately saying it “substantially undervalues” their business. TeliaSonera’s board along with Swedish government own 37 percent of the company, the Finnish government, a 13.7 percent shareholder has not as yet commented.

Didier Lombard, France Telecom’s CEO said: “We really need to have the full agreement of the TeliaSonera board. Otherwise we won’t be successful.” Lombard went on with he was not shocked at the rebuke from TeliaSonera, but would seek further discussion on the matter. 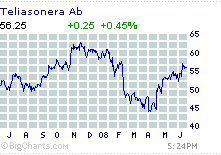 If France Telecom is successful in acquiring TeliaSonera it will be their largest acquisition since purchasing Orange for the sum of $55 billion back in 2000, and would make France Telecom the largest telecoms group in Europe as the potential tie-up of France Telecom and TeliaSonera would create a telecom giant with annual sales of 63 billion Euros and in excess of 237 million customers.