Cycle your way to power your mobile phone with O2

They are called mobile phones because they are mobile, right? So what can be more mobile they say…having your bicycle charge your mobile phone as you cycle? Cool idea for all the cycling enthusiasts out there. Harnessing all they peddle power into your mobile phone does sound like a neat idea.

Well some ingenious people have done just that, and the ingenious people being O2. And O2 are to showcase their new mobile phone battery charger, which harnesses all that wasted energy for a person’s peddling and transforms it into electrical power for your mobile phone at the O2 Wireless Festival in Hyde Park, London from 3rd to 6th July. 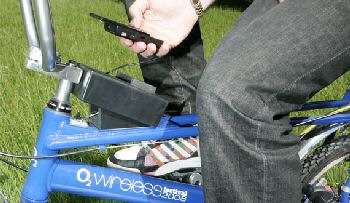 Although don’t expect to see O2 representatives riding round on bikes showing you how great their new toy is, unfortunately the BMX bikes are anchored to the ground, however it does offer a new alternative way to charge a mobile phone without plugging into the mains.

One for the cyclists that could actually work if it hits the streets, just think of how many cyclists there are, and no longer needing to carry a charger as their cycling can charge while on the go, or let it store the charge until you need to power up your mobile phone.

So are O2 planning to mass produce and sell this to cyclists? Apparently, “Not for the foreseeable future,” which makes one wonder why showcase it then?