Well for once it would appear that Rogers Wireless of Canada has learned a valuable lesson concerning data plans. Following on from their attempts to appease the irate iPhone 3G hoards with its generous $30.00 data plan, The GSM carrier has now announced they are to extend the more reasonably priced data plan to cover all their smartphones.

One thinks that this may be a smart more for Rogers, and probably rather than face even more criticism and damaging complains over their data plan pricing, Rogers is to be giving their customers 6GB on monthly wireless data transfers for only $30.00 on their mobile phones such as the iPhone 3G, Motorola Q9h, Palm Treo, Nokia N95, and HTC TyTn. 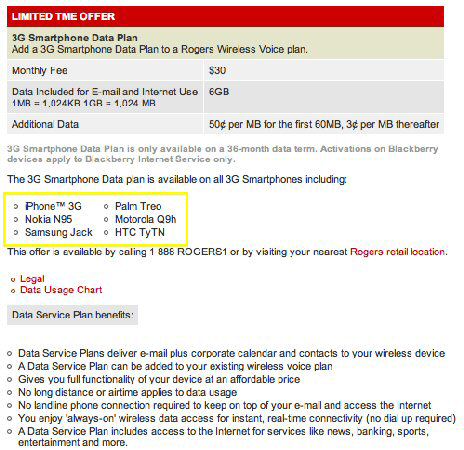 Although, Rogers is backing this offer up with a “Limited Time Offer” attached, so my guess is if the Canadians customers want to get I of the good data pricing they need to be pretty quick.