We all know the holiday season is getting closer and it is good to know what new handsets will be the ones that will excite us, we all need to get ready for Black Friday as deals will come in left right and centre.

We found some comforting information to do with the Verizon Holiday Roadmap, for example the HTC Hero is coming in November, Motorola Tao is coming late October/early November, how about the likes of Samsung’s new handsets like the Razzle, Chocolate Touch and Barrage, yes we can see the holidays will bring new phones and no doubt amazing deals to win you over to spend a little. 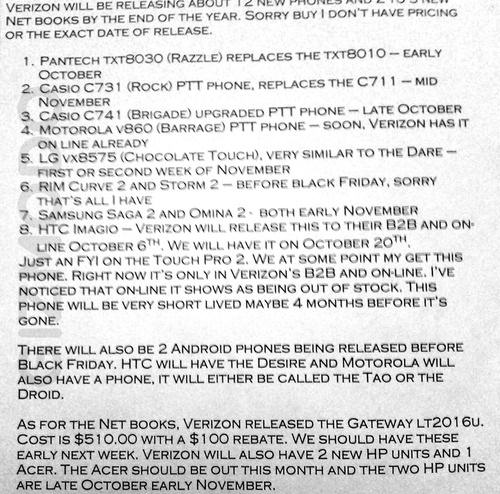 The BlackBerry Storm 2 and Curve 2 are on their way to us, and yes there is also the Samsung Omnia 2, they have also reported that Verizon is getting in the Android act by releasing the HTC Tao and HTC Hero before Black Friday, last but not least the Imagio is already out for B2B and stores will start selling by Oct 20.