Apparently there will be a new Android device making an appearance at CES 2011 from a company known as SBN Tech and the device will be a video phone that runs the Android operating system, although apparently this new phone has features that are more associated with a tablet.

According to an article over on Slash Gear by Shane McGlaun, and by way of Android Community, and Aving, the SBN Tech IP video phone will sort a 10.1 inch display with a 1024 x 600 resolution, plays nice with such mobile apps as Skype, Facebook, Twitter, Picasa and Think-Free Office. 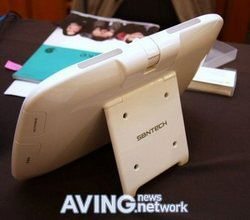 The SBN Tech IP video phone will also sport either a CCD VGA or CMOs camera for two-way video chat, has an SD card slot, can play HD media and features a kickstand.