A little while ago the NVIDIA Tegra Zone application was launched and apparently the app includes some info related to Sony, and that info is that Sony’s PlayStation Suite will come to Tegra 2 devices at some point.

According to an article over on Engadget by way of Android And Me, via Tweekers, the same PS Suite that will deliver PlayStations One games to the Sony Ericsson Xperia Play will be hitting other Android Tegra 2 smartphones and tablets later in the year.

Apparently which Terga 2 devices that will gain the PS Suite hasn’t been said but a couple of PS One games have come to light such as Syphon Filter, Cool Boarders 2 and Wild Arms, which are expected to be ready later this year.

However according to the guys of Engadget they couldn’t confirm said claims that PlayStation 2 games will at some point be released on Android devices.

So there it is for what it’s worth, it looks like at some point in the future certain Tegra 2 sporting Android devices will be able to play nice with PSOne games but it remains unclear whether PS2 games will follow. 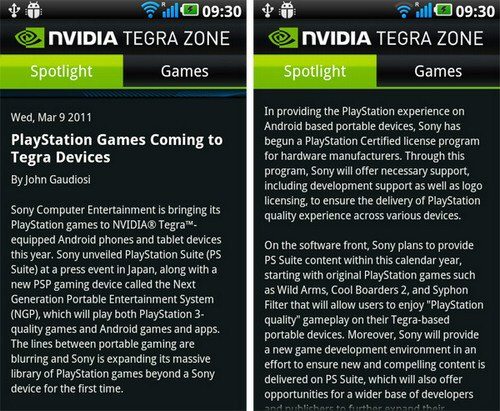