The long, long wait for owners of the Samsung Epic 4G and Samsung Transform smartphone to gain the Android 2.2 Froyo update just might be finally coming to an end after Samsungs last failed attempt to push out the update.

According to an article over on Android Police and by way of Android Central, documents leaked to “anonymous tipsters” reveal that the Samsung Epic 4G along with the Samsung Transform and the Samsung Galaxy Tab will receive an over-the-air update.

Apparently the Samsung Epic 4G will be updated to ECO5, which apparently is the Android 2.2 Froyo update, while the Samsung Galaxy Tab, and the Samsung Transform will receive EB28 again Android Froyo.

However, although the over-the-air update to the Android devices is scheduled for Monday the 21st, the word is it will take something like 4 days to get the update to all devices.

So does this news of Android 2.2 Froyo coming to play on your Sammy device make you happy or are you expecting things to go wrong like before? 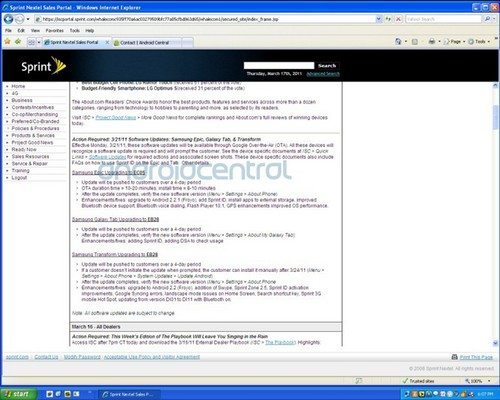