The latest flagship iOS tablet from Apple is of course the Apple iPad 2, while the flagship Android tablet from Motorola is the Motorola Xoom, but how do these two tablet giants stand up against each other when going head to head?

Well you are about to find out as we have a comparison video between the Apple iPad 2 and Motorola Xoom, or to put it another way iOS against Android 3.0 Honeycomb for your viewing pleasure below courtesy of the guys over at Daily iPhone Blog and by way of Phone Arena.

The tablet battle video delivers almost thirteen minutes of battle time between the Apple iPad 2 and Motorola Xoom. Both tablets are somewhat similar, both have large displays, similar hardware under the hood and priced similarly, but which one will come out on top in this battle?

Well I could tell you but I’m not going to, you have to hit that play button to find out, or you could hit up the Phone Arena website and check out their lengthy 4 page review of the Apple iPad 2 and Motorola Xoom comparison, but if you don’t have time for that then head right to the video below…enjoy. 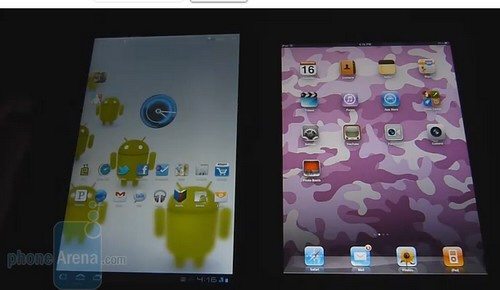