According to an article over on Crackberry and by way of the Boy Genius Report, this is the first time the 4G WiMAX BlackBerry PlayBook has shown up on Sprint’s website, although there’s no real new information shown.

However the landing page does let us know that the BlackBerry PlayBook 4G version will become available some time in the summer, and there is a “sing up now” button for those who wish to be kept notified when more info is available.

Other than that not much else can be gleaned, but with CTIA kicking off today maybe we’ll learn more from Sprint over the coming weeks, and of course we’ll pass whatever we learn along.

Any of our readers holding out on picking up a tablet so they can get the 4G enabled BlackBerry PlayBook on Sprint? 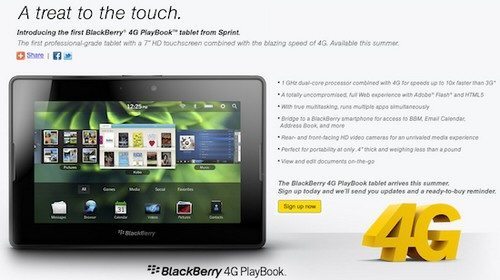