Yesterday the word was that owners of the Motorola Droid X smartphone could gain Android Gingerbread as of Sunday; however the word now is that the Gingerbread update for the device has now been delayed.

According to an article over on Pocket Now by way of Droid-life, a tweet from @PydePypper broke the word that Verizon has rejected the Android 2.3 Gingerbread update and thus wont be rolled out Sunday or any time soon.

The tweet said…“Pass the word folks just got word the GB build for the X was rejected by VZW so it is back to Moto 4 fixes. Talking another month 4 release”

So if this latest rumour is spot on it looks like Motorola Droid X owners will have another four week to wait before there is any hope of Gingerbread coming to play on the Droid X as it will take this time for Motorola to tweak the software and return it for approval by Verizon.

Thus for the time being, Droid X owners will have to be patient for a while longer, feel free to voice your annoyance to our comments area below. 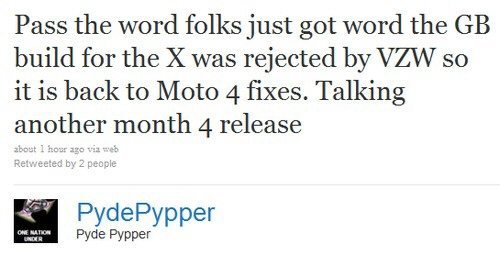