Android Apps Can Be Previewed on Amazon Appstore Only US Though

As most know Amazon has now launched their Android app store in the US, but international Android users can’t download those Android apps to their smartphone, which is somewhat of a pain if certain apps don’t end up in the Android Market like Angry Birds Rio.

However US Android users can now apparently check out app before purchasing them as according to an article over on Slash Gear, by way of Android Community, the Amazon Appstore enables users to “test drive” certain Android app on their PC, thus delivering a preview of what the app would work like.

Currently there are roughly 20 Android app available for people to check out via the Amazon test drive program, and again something that isn’t available to Android users outside the US of A, (does Amazon have something against international Android users?)

Apparently a user can click on an app and a pop up windows appears that you can use the app for roughly 30 minutes and you use your mouse rather than a touch screen to work the app.

Like I said, if you are outside the US don’t bother trying the test drive program because the “test drive” button doesn’t show up for UK users anyway. Perhaps it’s about time Amazon made their Appstore available via their UK and other international sites as well. 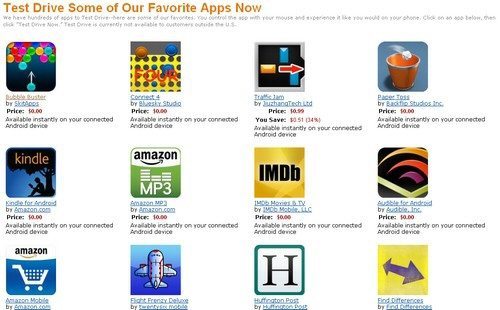