We now know that the Samsung Galaxy S II will be running at a faster speed with the introduction of a bigger dual core processor, but could this addition to the phone mean delays to its release.

Nevertheless, now there are concerns that the release of the Samsung Galaxy S II could be delayed until after April. However, in the first of a two part tweet yesterday from Samsung, coming to us by way of Engadget the company stated that the “Samsung Galaxy S II will be first released in April, as planned.”, which should have ease our fears a bit.

However, the second part of the tweet stated “It (Samsung Galaxy S II) will be gradually rolled out in each market according to the local launch timetable.” Thus, indicating that some places may see the Android device sometime in April, whereby others may just have to wait that little bit longer. 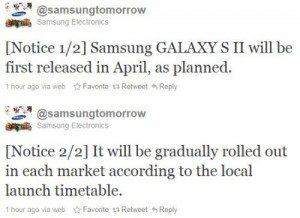 Well, as there is still no definite date of when the Samsung Galaxy S II will be in your area, why not pre-order yours via Play – see our article here.

What are your views, do you think we will see the Galaxy S II in April?