Several Apple patents have hit the net waves recently and the latest of which points to the possibility of E-Ink/Retina Display hybrid which could possibly be used on the upcoming Apple iPhone 5 and Apple iPad 3, although probably unlikely.

“Apple’s second patent surprise of the day is all about Apple devising a next generation iPhone that would effectively offer us a smart hybrid display that could switch between a standard LCD and an e-Paper display. In fact, it’s so smart that the display could actually subdivide itself into quadrants that could intelligently switch display types depending on the content that the user is running.”

Apparently the “smart screen” would utilise E-Ink and Retina depending on what the screen is displaying at the time, and according to the patent the tech would auto-switch depending on light conditions or what is being displayed and that the display would split into quadrants with each quadrant displaying different tech, meaning if an image was displayed it would use Retina and if text then it would use E-Ink.

Yes well all very technical, but basically we hardly ever see any of these patents materialise so can easily discount them from the iPhone 5 and Apple iPad 3, but who knows, maybe Apple will deliver on this tech as some stage in the future. 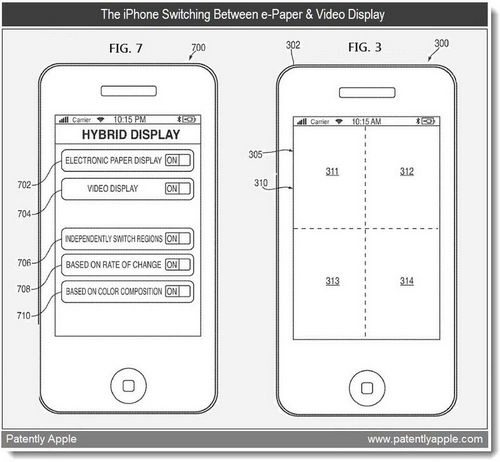