Earlier this year at the CES the Samsung Droid Charge, was officially unveiled as ‘unnamed’. There is still not a lot of information coming out with regards to this device, but it can only be a good thing when accessories and promo cards start showing up.

The arrival of accessories and promo cards does not necessarily mean the Droid Charge will be making an appearance soon, as a similar situation occurred with the HTC Thunderbolt, which still took months and months to arrive. Nevertheless, it lets us know that the wheels are still in motion for Samsung’s Droid Charger, which can only be a good thing. 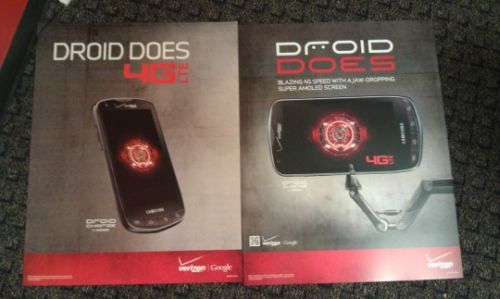 Now initially this phone was reported as being called the Stealth V, see are article dated March 10, 2011 on the release date and specs. However, since that article it would appear that Samsung have changed the name to Droid Charger.

The Samsung Droid Charger Verizon 4G LTE smartphone is sure to catch the eye of many a prospective buyer and could do very well in the market place, that is of course when it is finally prised away from Samsung’s clutch. As indicated in the article by AndroidCommunity this handset is a bigger brother to the Galaxy S and features the same 1 Ghz processor, but with an amazing upgraded 4.3â€³ AMOLED Plus display.

Are you waiting for the release of the Samsung Droid Charger? If so, how long are you prepared to wait?