If you are in the market for a budget Android smartphone you might like to consider the latest budget handset out of the LG camp, the LG Optimus Me, a reasonably priced handset that offers most of the functions and features of higher end devices.

The guys over at PC World have given the LG Optimus Me the review treatment, so we thought we’d let you know what they think of the Android 2.2 Froyo smartphone so you can make an informed decision as to whether to pick up the device.

The LG Optimus Me is a rounded device and its back curves inwards near its centre and features a 2.8-inch capacitive touch screen but with a low resolution of 240 x 320 which results in poor viewing angels, and text input is somewhat frustrating on the small display with a tiny default on-screen keyboard.

The LG Optimus Me features an LG UI over Android 2.2 Froyo but is minimalist yet still offers some good features such as GPS, WiFi, Bluetooth, and Airplane mode. Performance wise thought the LG Optium Me is adequate and sometimes sluggish.

The guys have come up with a few pros and cons for the $229 Android handset, the pros are most benefits of Android, capacitive touch screen and multi-touch and a reasonable price, while the cons are low resolution and slow display, poor on-screen keyboard and occasional sluggish performance.

Other specs include a 3 megapixel camera, Flash support, 2GB internal memory, and expandable MicroSD slot, 1250mAh battery that is said to deliver up to 7 hours of talk time and up to 510 hours standby time. 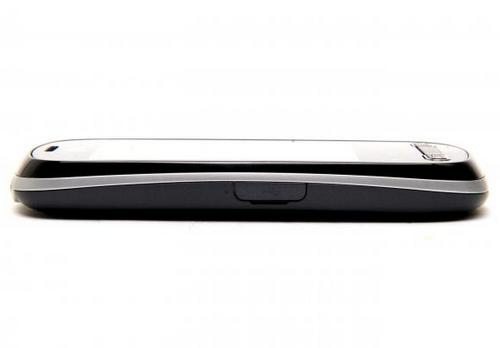