The latest feature people want to see on smartphones is 3D and with devices like the LG Optimus 3D and HTC EVO 3D soon to hit the market, they now have a new player to contend with in the shape of the Gingerbread totting Sharp Aquos SH-12C Phone, featuring 3D and dual cameras.

The Sharp Aquos SH-12C Phone is not a name that is going to roll of peoples tongues easily. However, with dual cameras sitting nicely on its back that go all the way up to 8 megapixels (compared to that of the HTC EVO 3D‘s 5 megapixels), and the power punching 1.4GHz Qualcomm MSM8255 chip locked away inside, it is certainly going to be a name to remember. 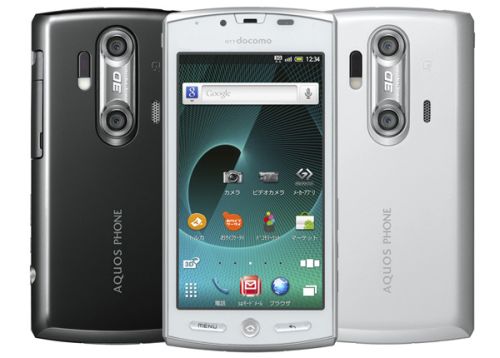 Other features of the Aquos SH-12C Phone are the qHD (540 x 960) screen resolution, which keeps it up there with the EVO 3D. Although the 3D-capable display size on the Aquos Phone at 4.2-inch is slightly smaller than that of its HTC rival.

As stated in the article by Engadget, the SH-12C runs on Android 2.3, stuffed with some evident customizations and 720p video recording in 3D, the Aquos SH-12C Phone is most definitely going to be a big hit, when it is launched on May 20th in Japan by Sharp. At present, we do not know when the rest of us will see a release, so until then practise saying the name.

Do you want one? I think I do!