Netflix for Android Handled on Video

You may or may not be aware that Netflix has now come to the Android platform and is available as a free app from the Android Market, but apparently is currently only for the HTC Incredible, Nexus One, HTC EVO 4G, G2 and Samsung Nexus S running Android 2.2 Froyo and above.

However apparently the guys over at Enadget managed to load the Netflix app onto their Motorola Droid X but gave the app a spin on the Nexus S and recorded the outcome on video, which we have for your viewing consideration below.

So what do the guys say about Netflix on Android? Well they say it’s much like Netflix on iOS and it is difficult to tell them apart if it wasn’t for the tabs being moved from the bottom to the top of the screen while everything is more or less as one would expect and streaming performance over WiFi is great.

So rather than me write it all out as it’s Friday afternoon, I’ll leave it there and simply let you jump on down to hit the play button and check out Netflix for Android…enjoy. 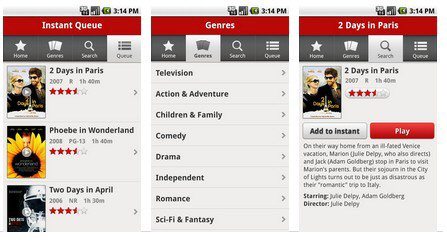 One thought on “Netflix for Android Handled on Video”