Great news for those waiting for the Samsung Galaxy Tab 10.1, rumour has it that the tablet could be on its way to Verizon in both Black and White, with 16GB and 32GB storage capacities. There is also a possibility that it could arrive with 4G LTE. 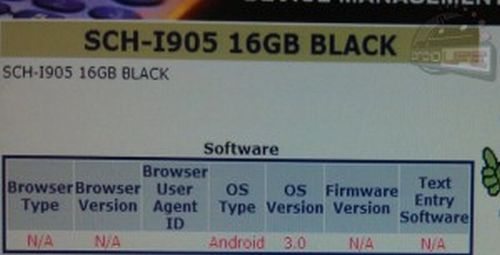 In a Big Red system the model number SCH-I905 is listed and this model number is being referred to as a “4GTablet” that runs on Android 3.0 (Honeycomb), this most definitely relates to a Samsung device. There is also further information indicating that it will not come loaded with VCAST.

Already released for the device is a WiFi certification (see below) and although there is a mention under ‘Category’ of it being a smartphone, we have already seen that the model number relates to a “4GTablet” that will be running Honeycomb. Thus, indicating that it is not a Verizon version of a small handset.

As stated in the article by Droid-Life, there is no idea when this Android 3.0 run 4G LTE version might be ready, but there could be an announcement at the big press event held by Samsung, which is scheduled for May 26th (the same day the DROIDX2 comes out to play). There is an expectation by most of us that Samsung will announce the S2’s arrival in the U.S., but you never know they could also mention something about this new tablet variation.