Looks like old Sammy wants to get into the Android app development game in a big was as the word is Samsung has created a whole new developer forum for those Android developers professional or amateur to play around in, and that new forum is now live.

According to Phone Arena by way of Android Central, Sammy has now launched their own Android developer forum that can apparently help the novice developer as well as the more ardent dev.

Here’s what the official PR says…“Samsung’s Android Developer Forum enables Android developers all over the world to broaden their scope and achieve even higher levels of quality when designing for Samsung’s Android-based devices, while customers will continue experiencing high-standard Android applications available from Samsung Apps, our application store.”

The new dev forum, which can be accessed by hitting up developer.Samsung.com/android, offers the developer an abundance of helpful info along with numerous tools, but does apparently only related to Samsung Android devices, which is to be expected.

So if you’ve been wanting to join someone like Samsung to develop your developing skills with the Android platform, then why not head on over and give it a bit of a bash to see how it goes. 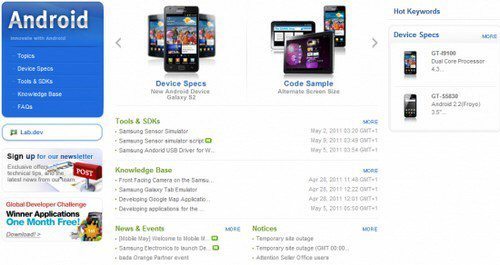