If you are the proud owner of the iPhone or Apple iPad on the AT&T network it appears that you may be paying somewhat over the odds for using your iOS device as apparently lawyers say AT&T is overcharging iPhone and iPad customers, some to the tune of 300%.

According to an article over on 9to5 Mac, the lawyers in question have run tests to confirm AT&T’s data overcharging, and apparently test included purchasing a new iPhone then switching everything off to do with data and then leaving the iOS smartphone alone for a couple of weeks.

The lawyers say that during the two-week period the iPhone lay dormant, no less than 35 differing data charged were occurred. Apparently AT&T’s response is the iPhone uses data without the owner knowing.

We have a video courtesy of MSNBC outlining the consumer alert on AT&T overcharging for iPhone and iPad data, so head on down and mash that play button to check it out, and feel free to let us know your views on this matter by posting to our comments area below…enjoy. 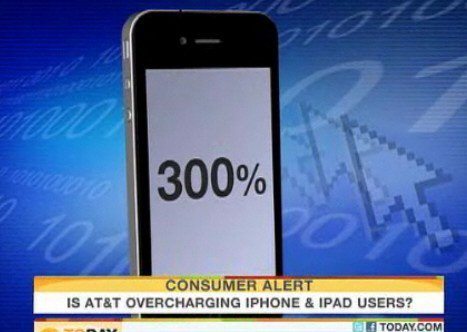 One thought on “iPhone and iPad Users Overcharged by AT&T: Video”