Ever wondered how Twitter kicked off in those early days? Well apparently the RIM 850 pager played its part albeit a small part, and Jack Dorsey, Twitter’s founder gives credit to the RIM 850 as the device that helped start it all.

According to the guys over at Crackberry and by way of Gizmodo, the Twitter founder said… “I had a RIM pager, the 850, the first email device. I programed a system where I could fire off an email from that and set my status from anywhere. And it worked! And I was able to also at a regular interval pull my buddy list and get those updates sent to my email address. It was awesome! But the number of people who had those mobile devices was so minimal that the timing was just not right. This was 2001.”

Apparently back in 2006 Dorsey resurrected his idea and combined the status updates of instant messenger along with the timeline aspects of LiveJournal, threw in the concept of dispatch software and Twitter was born, and we all know where it went from there. 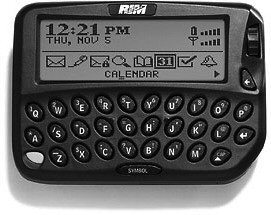