Old Sammy just loves pushing out new variants of the popular Galaxy smartphone range and the latest of these is the Samsung Galaxy Mini, a low-end feel handset that is lighter and has a lower camera, and now the Samsung galaxy Mini has gained a review.

The review of the Samsung Galaxy Mini is done by the guys over at Tech UK, and by way of Tech Radar, and say that the Android 2.2 Froyo smartphone looks and feels fairly cheap, and the white model begins to look grubby after a week of use.

The Samsung Galaxy Mini measures 110 x 60 x 12mm and weighs in at 106.6 grams, so is a good hand size but is quite slippery, a simplistic device with flush buttons on the sides and sports a 3.14-inch capacitive touch screen with a 240 x 320 resolution but the Android handset does sport impressive 3G HSDPA download speeds.

There are a few pros and cons to the Samsung Galaxy Mini, the pros are fast 3G and WiFi, and the GPS coupled with Google’s navigation app works really well, and is reasonably affordable.

On the con side sacrifices have been made to get that low price point, such as the touch screen is unresponsive at times making the experience slow, app launching is slow, and the low quality of the display makes reading a bit of a task.

As for that reasonable, affordable price, the Android smartphone costs Â£129.99 on prepay or Â£10.50 a month on contract with O2, so anyone considering picking up the Samsung Galaxy Mini? 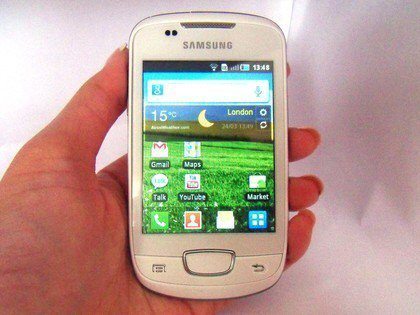 One thought on “Samsung Galaxy Mini: Affordable But With Sacrifices”