Now here’s a thing, in today’s smartphone space most devices are packing large touch screens, but for some reason the latest smartphone that may see a mini version at some point in the future is rumoured to be the HTC Thunderbolt, but would a mini sized Thunderbolt do well?

According to the guys over at Phone Dog the guys over at Pocket Now have come across a user agent profile image (UAprofs) which makes mention of a CDMA handset known as the Mecha S, which apparently could be an HTC Thunderbolt Mini.

Apparently the reason for the assumption that this Mecha S is a mini version of the 4G enabled Android handset is because the codename for the HTC Thunderbolt before launch was “Mecha.”

Normally the letter “S” attachment to HTC devices apparently means said device is destined for Europe; however, the Pocket Now guys believe in this case it’s different as the UAprofs shows that the Mecha S screen resolution is 320 x 480 which could indicate that it has a small screen, so the guys reckon this time that “S” stands for small.

So if it turns out to be the case and HTC does indeed deliver a smaller version of the HTC Thunderbolt, will the device be as popular as the original Android handset. Would any of our readers consider picking up a Thunderbolt Mini if it appears? 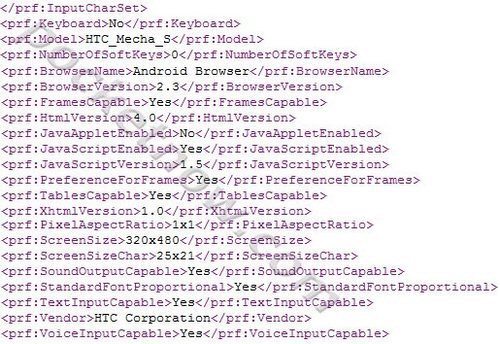