If you are a festival attendee with a mobile phone and you use is to send off pictures, the odd video, texting you friends, tweeting and such during the event you’ll know just how quickly your smartphone can run out of charge, but fear not as Vodafone had a super truck equipped to charge up to 2000 handsets simultaneously and will be at 11 festivals this year.

According to an article over on The Next Web, the 44-ton 18-wheeler called the Vodafone VIP recharging truck apparently offers Vodafone customer to charge their mobile device free gratis and it is estimated the truck will charge some 72,000 handsets this summer.

The Vodafone VIP truck will be at music festivals, Formula 1 and such, and is for Vodafone suctomers to charge whatever handset they have like the iPhone, BlackBerry, Samsung, or Android and judgeing form the images you leave your phone there to charge can return for it later.

And we have a quick video of the Vodafone VIP Recharge Truck in action courtesy of the guys over at Electric Pig so you can see what the truck is all about, so head on down and check it out…enjoy. 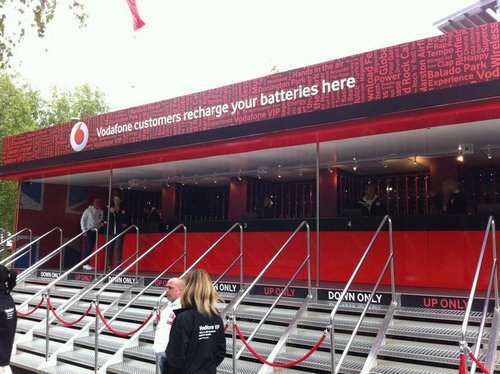