During Computex 2011 Pixel Qi delivered some new display technology for tablets, a 10.1-inch super-thin panel that is apparently ideal for Android Honeycomb tablets as it runs at 1280 x 800, and they placed the Pixel Qi up against the original Apple iPad in a little outside visual comparison demo video which we have for your viewing pleasure below.

The demo video of the Pixel Qi going up against the iOS tablet comes our way courtesy of the guys over at Slash Gear and by way of Arm Devices, and shows that the Pixel Qi beats the Apple iPad hands down when it comes to viewing the display in sunlight.

Apparently Pixel Qi isn’t stopping at a 10.1-inch model either as there’s a 7-inch panel on the cards, and currently measures 4mm thick although it is expected to get down to just 2mm thick with mass production happening by the end of Q3 2011.

Furthermore, Pixel Qi is apparently the fastest growing display firm around at the moment and expects to become dominant in display tech within 5 years, and is apparently also looking at a 4.3-inch panel for smartphones.

Anyway I’ll leave it there so you can head on down to hit that play button and check out the Apple iPad getting creamed by the Pixel Qi tablet when it comes to outside visibility…enjoy. 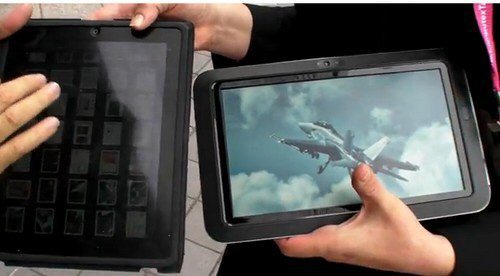