iPhone 4 Padfone Type Tablet by ECS: Does Multi-platform to

If you are one of the iPhone faithful liking the idea of the Asus Padfone tablet which was unveiled during Computex 2011then fear not because you may be getting a tablet that does just what the Asus Padfone does, but for your iPhone 4 and plays nice with iOS.

According to the guys over at 9to5 Mac by way of Itproportal, the ECS devices isn’t actually a tablet of sorts but rather a docking station that grabs the iPhone video and outputs it through HDMI to the built in display that is apparently 9.7 inches and 4:3 format the same as the Apple iPad.

The guys over at Itproportal say that although actual pricing and availability isn’t available for the tablet device, the word is ECS is looking to push out the device in Q3 with an estimated price of 200 bucks or below.

Apparently the ECS tablet/accessory will be multi-platform and will be able to dock smartphones such as the iPhone 4, Android handsets, Windows Phone devices and probably future iOS handsets including the iPhone 5 via “simple upgrades.”

No word on a name for the device yet but when it is released it should be available from telco providers. Imagine that, a tablet device that can dock with practically any smartphone, sounds rather cool doesn’t it? 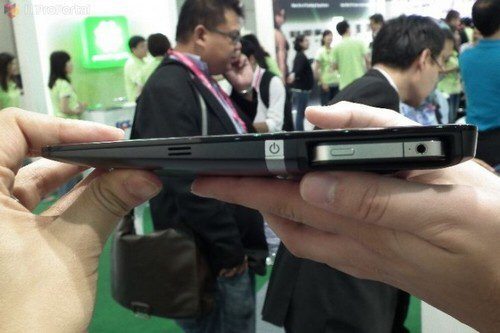