Apparently if you are in a bit of a hurry to own the HTC Sensation 4G on the T-Mobile network, and if you are prepared to beat off others and shell out 600 bucks for the Android smartphone, some guy is currently offering the handset on Craigslist.

The guys over at Tmonews spotted the Craigslist advert for the HTC Sensation 4G, which the seller says is in “like new” condition, whatever that may mean, as surely it should be in pristine condition unless the guys has thrown it about a bit.

If you are interested in purchasing the Android 2.3 Gingerbread touting device from this guy he asks you to text or call his number, which no doubt has already been inundated and by now the device may have gone.

However if you simply must get your hands on the HTC Sensation 4G earlier than anyone else then it may pay to contact the guy, however we advise it will be at your own risk as there’s no telling what that “like new” really means or where the handset originates from…anyone interested? 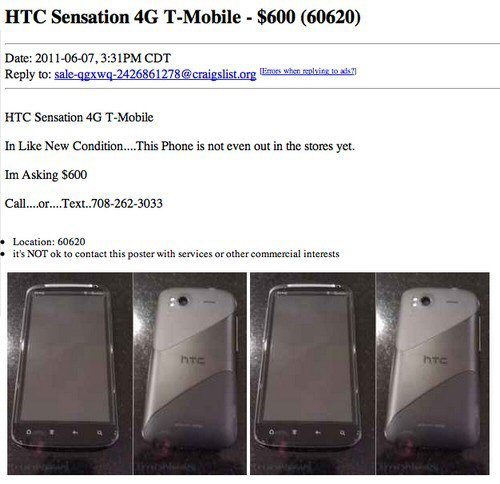 One thought on “HTC Sensation 4G Offered on Craigslist”