Rovio Mobile has had a huge success with their multi-platform game Angry Birds and the guys keep on updating so fans of the game can continue throwing differing coloured birds and the thieving green pigs, and Angry Birds for Android has now received another update.

According to the guys over at the Boy Genius Report, the Android version of Angry Birds has been updated with a new Mine and Dine episode which delivers yet another 45 new levels to the game bringing the total levels up to 225.

Apparently in the Mine and Dine chapter, those pesky green pigs take the fight beneath the surface, but as one would expect, the gameplay is basically the same as any other level in Angry Birds, catapult the birds at the pig constructions to retrieve the stolen eggs and hopefully pick up gems along the way.

Of course if you are an ardent Angry Birds fan on Android you can collect the update for free from the Android Market, personally I gave up playing the game long ago, but I might give this update a go to see how it goes. 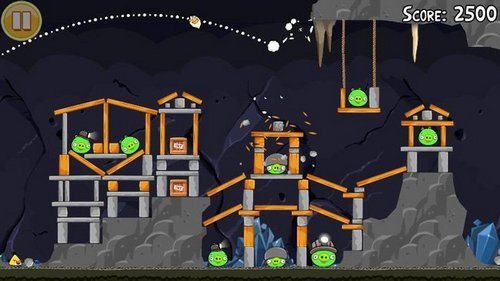