Ah, another day and another iPhone 5 release date rumour hits the net waves, and as usual the assumption on this particular release date is just like the one yesterday where it was speculated the next generation iPhone would see release on October the 4th, this new one is just as thin.

The new iPhone 5 release date is now speculated to possible, maybe, could be, the 16th of August and this latest piece of iPhone 5 release date jive comes from Cnet, and is based on a job listing posted by Gekko Ltd, for temporary workers that are required to work for few weeks in Apple retail stores.

Apparently an anonymous tipster sent in the info, which asks… “full-time iPhone Sales Staff for an exciting project to work 5 days a week (Tuesday-Saturday) for the period 16th August – 29th October within key retail stores.”

Thus this leads to the assumption that there could possibly be a chance that Apple is going to try and surprise everyone by releasing the iPhone 5 on the 16th of August rather than the much talked about September release.

Having said that, of course the employment period does span 11 weeks, so Apple could opt to release the next generation iOS smartphone any time during this period, thus the September and the previous mentioned October release dates could also possibly, maybe, be correct.

Pinning the iPhone 5 release date to the first date new employees start work at certain Apple retail stores is a bit thin on the ground and obviously isn’t conformation of the release date in any shape or form and thus remains in the land of guess work.

Apparently Gekko has worked for Apple before as attested by their awards page, specific Apple branded sections found in bigger outlets, and Cnet says, “We’d wager that Gekko is hiring to fill these sections, as one of the responsibilities of the advertised role is to “ensure the Apple area within the store is effectively merchandised.”

Now the guys could be correct in their assumption, but then again they might not be as it seem the closer we get to these speculated iPhone 5 release dates, the more new release dates appear, so basically it’s anyone guess just when Apple will deliver and as I’m sure you are away by now, Apple isn’t going to let on. 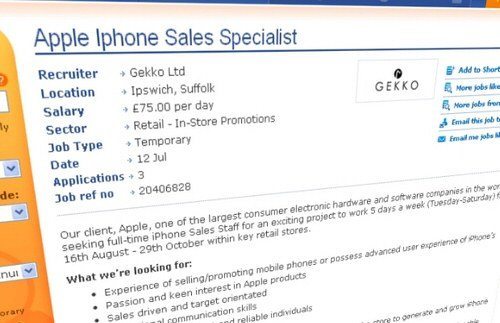