One would presume that retailers actually know about the smartphones and tablet they offer their customers, but apparently Best Buy isn’t all that up of the latest technology or they aren’t too sure which device runs what operating system, as someone at Best Buy Canada has made a bit of a faux pas with advertising the HP TouchPad.

According to an article over on Pre Central, Best Buy Canada believes the HP TouchPad tablet runs Android 3.0 Honeycomb rather than webOS 3.0, and have advertise as such.

Now we know that there are several operating systems out there in the mobile world, Android Honeycomb, QNX for the BlackBerry PlayBook, iOS for the Apple iPad and webOS for the HP TouchPad, but it isn’t that difficult to get the right operating system with the right tablet is it?

Perhaps whoever at Best Buy Canada that made the advert felt sorry for the HP TouchPad not getting that good reviews and decided to take it upon themselves to give the TouchPad an OS upgrade to the Android platform.

I figure it could have been worse, they could have advertised that the HP TouchPad runs iOS, but then that would have been a double faux par because of the Adobe Flash support sitting right under the OS.

This isn’t the first time Best Buy has scrambled thing up either, but the thing is are people at Best Buy that untrained that they simply don’t know which operating system goes with which device, which also begs the question do they actually know about the device they are offering the public?

Obviously anyone can at times make a mistake, and no doubt this was a genuine boobie that Best Buy has put right, but honestly if you are working with tech gear you should know what device suits what operating system and these slip up simply shouldn’t happen.

I do wonder though if the HP TouchPad would have received better reviews if the slate was an Android device, but then again that’s unlikely to happen no matter how many times Best Buy gets it wrong, get your act into gear guys and perhaps go back to the drawing board and check a device before producing the adverts. 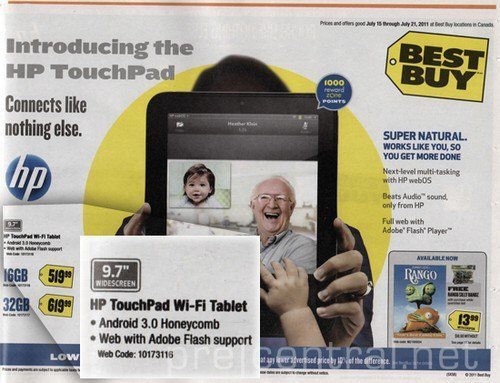