Of course we have those tutorial videos below for your viewing consideration that come our way courtesy of the guys over at Android Community and by way of the Asus YouTube page and there are ten of them for you.

Whiles the other five videos are, playing games and game performance, the difference between the Eee Pad Transformer and the Apple iPad and Android Honeycomb, photo and video quality, multimedia content sharing via MyNet, and lastly home computer access with the Asus Eee Pad transformer.

The total viewing time when all the footage is combined comes to approximately seventeen minutes so shouldn’t take up too much time to check them all out and learn a bit of how to use your Asus Eee Pad Transformer to its best advantage, and considering a lot of the info in the footage is universal it could be of use to other Android tablet users as well.

For those that might still be contemplating purchasing the Asus Eee Pad Transformer, the Android slate offers a 10.1-inch touch screen, an NVIDIA Tegra 2 1GHz duel core processor, a 5 megapixel rear camera, a 1.2 megapixel front facing camera, Bluetooth, WiFi, 16GB and 32GB storage options and microSD expansion and currently runs Android 3.1 Honeycomb, but it is expected to see an update to Android 3.2 Honeycomb soon.

Well that’s about your lout, so I’ll shut up now and let those Asus Eee Pad Transformer toting readers out there head on down to hit those play button and check out the tutorials…enjoy. 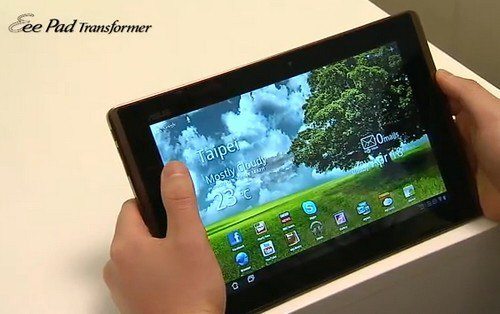