For all you Droid smartphone fans out there we have a comparison battle between two of the big Droid guns for your viewing consideration below, a video that pits the Motorola Droid 3 up against the Motorola Droid X2 in a battle of Android against Android, the fight of the Droids.

The Motorola Droid 3 versus the Motorola Droid X2 comparison video comes our way courtesy of the guys over at Phone Arena, and delivers just over thirteen minutes bringing us a clash of the Droids, and they have also done a four page written comparison on their website for your perusal.

However if you simply don’t have the time to hit up that full on written comparison then you can simply take advantage of checking out the Droid footage below.

Design wise, both Motorola handsets retain the same design as their predecessors so there isn’t an overall winner in the design stakes and even their overall size is similar to each other, albeit the portion that houses the Motorola Droid X2 camera is thicker that anywhere on the Motorola Droid 3, but both have a solid build.

Performance wise the guys say calling quality is great on both Android smartphones and both deliver a minimum of a day’s normal usage in battery life, with the Droid X2 probably delivering a little more life but only just.

So can either of the Droids come out a clear overall winner an put the other in the shade, as you well know, I’m not going to say but rather let you head on down to hit that play button and check out this battle of the Droid for yourself, but feel free to voice your opinions on either handset to our comments area below…enjoy. 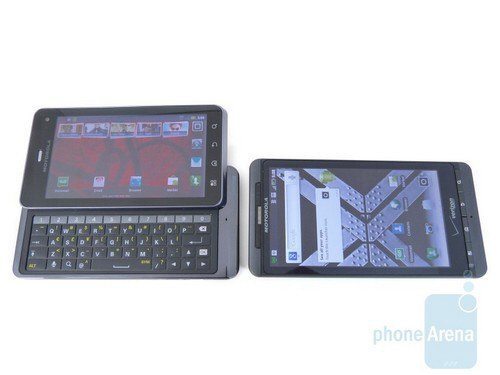