Is seems that Australia will soon be gaining the Parrot Asteroid, an in-car Internet enabled receiver that uses the Android operating system that can run in-vehicle applications on a 3.2-inch display and also features voice commands for hands-free driving.

According to an article over on Smarthouse, the Parrot Asteroid is a “first-of-its-kind” Android device with Bluetooth capability that enables the driver to link with their mobile phone and other wireless devices and enables voice search of songs.

The Parrot Asteroid delivers to the user a wide range of apps and web services such as the Asteroid specific GPS navigation and features USB ports and an SD card slot for such stuff as music, images and video.

Having said that. Over here in the United Kingdom, you can already get the Parrot Asteroid Android in-car receiver and the devices commands a price tag of Â£299.99 inclusive of VAT from Parrot Shopping.

The Parrot Asteroid apparently plays all types of music sources including the iPhone and iPod Touch while delivering “Vocal Music Search” to access your music, which means you say the name of the song, artist, or album stored in your music library and the Parrot Asteroid will play the desired music.

However the Parrot Asteroid doesn’t just play music in your car, the device can also make and answer calls, reject and end calls, can have its software updated via USB, is steering wheel controls compatible.

The Parrot Asteroid isn’t completely wireless though as the device features a physical dial, back button, answer/ hand up buttons, a home button and other on its facia, presumably for when the user doesn’t want to be vocal.

According to Parrot, the design of the Parrot Asteroid “combines an elegant detachable faceplate equipped with backlight buttons and an innovative guiding system to insert the faceplate. Main functions are all accessible via the discreet jog wheel, making browsing through the menus more intuitive. The new and large high-definition 3.2” color screen displays in an instant all your information, phonebook, menus, music, playlist, album covers, internet applications etc.”

And just so you know what you are dealing with, we have a few Parrot Asteroid demonstration videos for your viewing pleasure below that show off Orange Live radio, Internet 3G, that voice activated music search function, and maps, so don’t forget to check them out below. 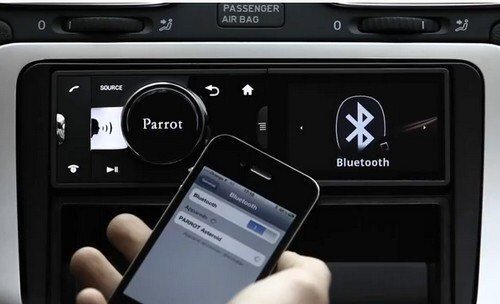