For those whose preferred platform is iOS and happen to be a fan of F1 racing, you just might like to hear that the official F1 2010 game is now available to download to your iPhone, iPod Touch or Apple iPad and is officially licensed from the FIA.

The F1 2010 Game for iOS devices is brought to our attention by the guys over at Redmond Pie, and offers the user 19 circuits, 12 teams and the official 24 drivers that featured in the F1 2010 season and enables the user to compete in time trials or go for the endurance mode to climb up the leaderboards.

The F1 2010 Game features three modes Time Trial, Endurance and Party Play, the last is where the user enters multiplayer mode and competes against four other F1 fans.

According to the guys this is the first version of the F1 application so it does have some limitations the main one being the game doesn’t have any computer components to actually race against, but the main circuits along with such F1 drivers as Hamilton, Alonso and Schumacher are there.

According to the official app blurb, “Experience the thrill of FORMULA ONEâ„¢ and immerse yourself into the OFFICIAL, adrenaline-fuelled world of FORMULA ONE racing with the new F1 2010 Gameâ„¢! With all 24 OFFICIAL drivers, 12 teams and 19 circuits featured in the 2010 season, including Korea, Hockenheim, and the return of Canada, F1 2010 Game will immerse players in the glamour and exhilaration of the world’s most exciting motorsport.”

For those F1 gaming fans out there that wish to take advantage of the F1 2010 Game, you can download the app to your iPhone, iPod Touch or Apple iPad running iOS 4.0 or above from iTunes at a cost of $2.99.

Personally I’m not a fan of F1 racing, as I find it rather boring, but there are many people that enjoy the trill of the race, so if you are pondering on picking up the F1 2010 game, we have a quick video demonstration of the game running on the Apple iPad 2 for your viewing consideration below courtesy of YouTube user iPhoneGamerUK, so don’t forget to check the footage out, and if you do grab the game feel free to let us know your opinions on the game by posting to our comments area below…enjoy. 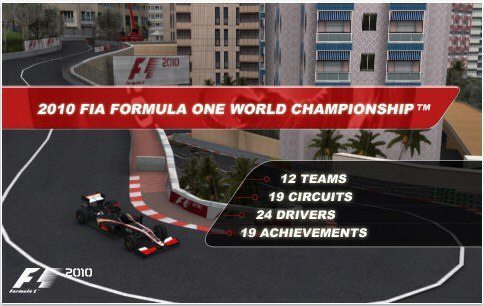