Okay if you are one the other world’s most filthy rich and have a yearning to own an unusual edition of Apple’s famed Apple iPad 2 then as long as you are prepared to dig exceedingly deep into your bank account you can purchase the Apple iPad 2 Gold History Edition to impress those less well off in your social circle.

According to an article over on Geekologie, luxury device maker Stuart Hughes is now offering the Apple iPad 2 Gold History Edition that seen this version of the iOS tablet lavishly bedecked in 12.5 cts of ‘I’’F’ flawless diamonds a total of 53 sparkling gems on the Apple logo.

The Apple iPad 2 Gold History edition as the title suggest has the rear of the slate made out of 2 kilograms of 24 carat Gold while the front frame has been made out of 75 million year old Ammolite, which is considered the oldest rock in the world.

Adoring the front of the Apple iPad 2 Gold History Edition is a single 8.5-carat diamond set in a platinum base and surrounded by 12 other flawless sparklers for the tablet’s home button.

Oh and there’s one other little addition the Apple iPad 2 Gold History Edition, and that is a piece of history itself in the form of a 65 million year old piece of T-REX dinosaur’s thigh bone which had been splintered and shaved into the Ammolite.

So just how much will the Apple iPad 2 Gold History Edition set you back? Well perhaps a word with your bank manager is needed before you jump in a write out the 5 million quid asking price, which is about $8 million for anyone in the US.

However if you really, really want to own one of these unique luxury Apple iPad 2 Gold History Edition slates, you will need to make up your mind rather quickly as apparently there will be only two made.

I mean come on, parts of a 65 million year old T-REX thighbone? Makes one wonder just where Stuart Hughes gets his materials from, but I do have to say if you are going to go for the dinosaur touch the best way is to choose a dinosaur everyone knows about. 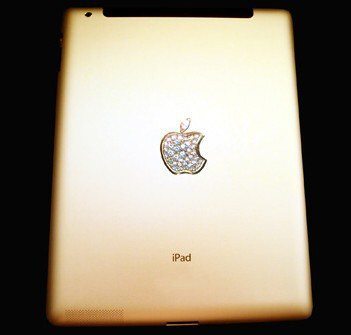