If you are one of the many that enjoy playing on the XBox 360, but on occasion have difficulty completing a particular game, you may at some stage need to cheat a little, and now if you own an iPhone, iPod Touch or Apple iPad a new cheat guide app has been released that will help you get over those difficult areas in numerous XBox 360 games.

The iOS app is called iCheats XBox 360 Edition and is an all-in-one game cheat guide with cheats for the XBox 360 handpicked from genuine gamers and helps the gamer get through every story and battle every enemy.

The iCheats XBox 360 Edition for iOS devices is packed to the brim with cheats for the top XBox 360 titles and already includes Halo 3, Dead Rising 2, Red Dead Redemption and Grand Theft Auto 4, with more game cheats that are planned to be added on a regular basis.

Currently the majority of cheat guide applications are downloaded one at a time, one reference app per game, whereas with iCheats XBox 360 Edition the app follows the trend set by applications such as “iBooks” and has all the cheat guides in one place using in-app purchases and with this technique, users will get the quality of the full priced guide applications without the hassle of managing icons spread across your home screen.

The iCheats XBox 360 Edition iOS app enables the XBox 360 gamer to master every game inside and out so you can get through all those difficult areas you have been struggling with and complete your favourite game.

For those that would like to take advantage of what the iCheats XBox 360 Edition iOS app offers you can download the application to your Apple iPad, iPod Touch or iPhone running iOS 4.0 or above as a free download from iTunes. 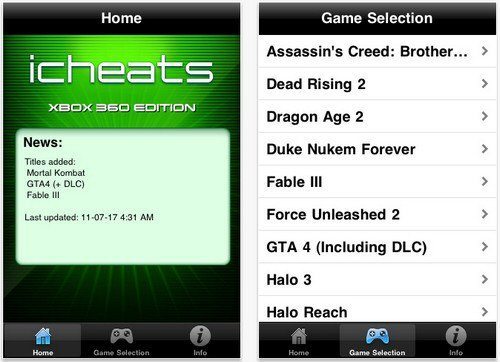