Well now it appears that Orange UK is now offering a little extra incentive to their mobile phone toting customers by introducing a new promotion that they have called Orange Film To Go, which offers their customers free iTunes movie rentals on the Thursday of each week.

According to the guys over at Slash Gear, the Orange Flim To Go promotion is basically an extension to the Orange Wednesday offer where Orange customers can get 2 for 1cinema tickets on each Wednesday.

The Orange Film To Go promotion offers the subscriber a pre-selected movie title each Thursday that can be accessed by either using a new application from Orange or by texting a special Film To Go code which customers request via text that will cost them 35p and each code can only be sent to the customer up to three times.

Apparently the movie rental is a standard iTunes download which can be started any time the user wishes over the following 30-days although once you start watching the movie it will expire after a 48 hours period.

This week’s move available to Film To Go is My Blueberry Nights, featuring Norah Jones in her screen debut, while next week’s movie offer is The Wrestler, staring Mickey Rourke. Apparently customers can apply for the code any time during the preceding week however the code can only be used on a Thursday.

As to whether the customer has the option to choose what movie they wish to view, Orange says, “The films are pre-selected by our team of film experts so unfortunately you are not able to choose your own. Orange Film To Go films are a mix of recent iTunes releases and cinema classics, covering a variety of genres so we’re confident you’ll enjoy our picks.”

So there you go Orange iPhone, iPod Touch and Apple iPad customers can now start watching iTunes movie every Thursday, although Orange would prefer you to do so over WiFi rather than 3G. 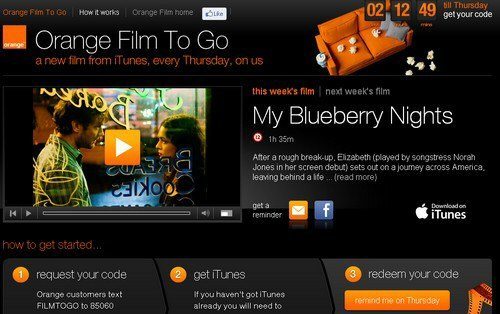